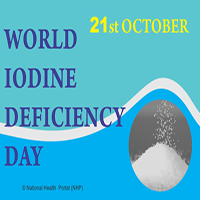 
Deficiency of iodine may cause following disorders:
The commonest source of iodine is salt. However it can also be found in other foods such as: