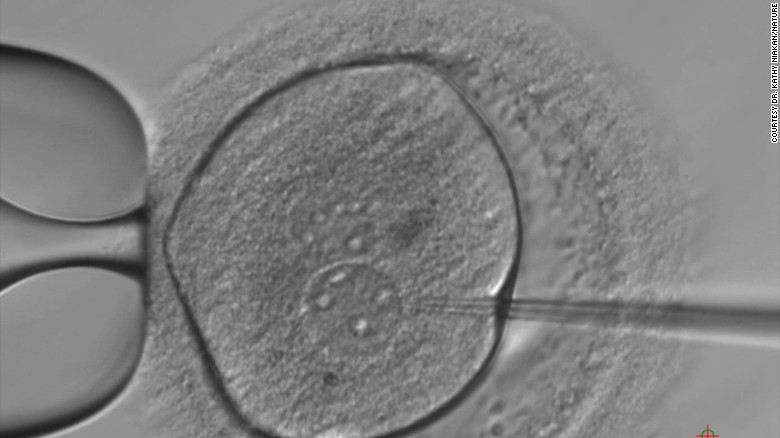 The DNA of human embryos has been altered and studied for the first time in the UK, offering new insight into the early stages of human development.

Scientists at the Francis Crick Institute, a medical research center, have identified the role of a key gene that controls how embryos form during the first few days of development.

Understanding the biology behind these early stages could help in the discovery of ways to improve the success of in-vitro fertilization, offer some explanation into why some women experience miscarriage and offer general knowledge on how humans develop.

Studies in the United States have manipulated the genomes of embryos to help understand -- and fix -- gene mutations that lead to inherited diseases, such as heart conditions. But this is the first research to target human growth and development.


'Switching off' a crucial stage

Stopping a gene from working and exploring what happens when it's gone is a good way to find out the gene's purpose.

The team used a gene-editing technique known as CRISPR-Cas9 to switch off a particular gene involved in embryo development, known as OCT4. Blocking the functioning of this gene means the resulting protein, also called OCT4, cannot be produced, eventually halting an embryo's development.

When a human egg is fertilized, it forms an embryo, which then divides and grows from one cell into a ball of more than 200 cells, called a blastocyst. At this point, the cells begin to separate and specialize, with some set to form the placenta and others destined to form a baby.

The researchers found that without OCT4, this blastocyst couldn't form.

"We were surprised to see just how crucial this gene is for human embryo development, but we need to continue our work to confirm its role," said Norah Fogarty of the Francis Crick Institute, first author of the study, which was published Wednesday in the journal Nature. "Other research methods, including studies in mice, suggested a later and more focused role for OCT4, so our results highlight the need for human embryo research," she said in a statement.

The new research investigated the role of this gene in mice and humans and found that OCT4 plays a different role in human embryos than in mice, highlighting the need for human research in this area.

"In humans, (OCT4) not only maintains the embryo, but other tissues are affected, and the blastocyst does not form," said Ludovic Vallier, a stem cell biologist at the Wellcome Trust Sanger Institute who co-authored the research. "In mice, (the gene) just maintains the integrity of the embryo."

Vallier believes this further highlights that human development is very specific and different from that of other species, meaning techniques based on animal models will have limitations. "We never know what to expect when we model from a mouse system," he said.

For the new study, the Crick Institute team blocked the OCT4 gene in 41 embryos donated by couples who had undergone IVF.